You work hard for your money. But as the risks of getting scammed increase, you have to work harder to protect it now, too. It seems that as the technology gets better and more accessible, those who are looking to cheat you only get smarter and more cunning. Sometimes the only way to fight back is to get a little dirty—without breaking the law like the criminal you’re trying to trap.

Jeff Brodsly is the CEO of credit card processing company Chosen Payments who, along with some of his clients within the chauffeured ground transportation industry, exposed a method that swindlers have been using to bilk merchants out of tens of thousands of dollars using offline authorizations. Justice was served after some investigation, patience, and teamwork—but not all stories like this end well for the companies being defrauded. Read on to learn how this tale unfolded and how you, too, can take the necessary measures to protect yourself and your company. » Uncovering a Problem with Chargebacks Brodsly started to notice that some of his transportation clients were receiving chargebacks initiated by the card-issuing banks, which is unusual—especially weeks and even months after the services in question were provided to a certain customer. Normally, this matter would remain between a merchant and the bank, with the merchant issuing the chargeback request, but Brodsly looked into the matter once he realized a client had become frustrated with the severity of the issue.

It seems that as the technology gets better and more accessible, those who are looking tocheat you only get smarter and more cunning.

Tom Soliman, owner of All Starz Limousine in Anaheim, Calif., had turned to Brodsly for help. “The customer used my services for three months before I found out there was a problem,” Soliman said, emphasizing that while “Charlie Barbero” started using his company’s services in December, it wasn’t until February that the bank charged back the services—and Barbero’s frequent trips had racked up quite a bill.Soliman recalls wondering how one client could purchase so much so easily. At one point, Barbero hired an All Starz chauffeur to drop him off at a Mercedes-Benz dealership—where he bought two cars and informed the chauffeur that he would no longer require the company’s services. It wasn’t only Soliman’s company that was taken for a ride: Both cars, which were purchased on a credit card, were also charged back. Soliman said that when he later received a rundown of Barbero’s fake credit card charges, he learned that the alleged scammer had done the same thing at upscale hotels and stores. Hyatt Regency, Neiman Marcus, Barneys New York, SLS Hotel, The Beverly Hills Hotel, Walt Disney properties, and many more well-known merchants were among the victimized businesses. Soliman also learned that the credit cards Barbero was using had expired several years ago.» Figuring Out How the Scam WorksAfter Soliman initiated contact, Brodsly and his staff examined the trail Barbero had left. “When I first looked at the records, I was astonished,” Brodsly said. “I did not even realize a person could fake an authorization code and have someone force it through as a sale—and the money would actually be paid by the processor! I’ve been in this business for years and have never seen anything like it.”He then consulted with other experts, turning to his network at the world’s largest payment processor First Data, with which Brodsly is closely aligned. He also spoke with Wells Fargo and Bank of America, as well as his contacts at Visa and MasterCard. “It was a lot of work, but we finally got to the bottom of it,” said Brodsly. “I am fortunate to have deep-rooted, heavy-hitting contacts who will roll up their sleeves if and when I need to bring them in on something.” Brodsly then contacted his client to explain what he had discovered—and to begin sounding the alarm. Brodsly’s investigation yielded the alleged scammer’s method: “Barbero” would call Soliman and book a trip with his credit card. When the card wouldn’t go through, Barbero would say it’s a mistake and told Soliman’s reservation staff that he would call the bank. A few minutes later, he would call back with an authorization code; when Soliman’s staff put the code through, as instructed by Barbero, it would come back as an offline approval—so it all seemed fine to Soliman.“An offline authorization is misleading, especially since the money charged is paid immediately by the processor,” Brodsly explained. But just because a transaction is paid doesn’t mean it’s actually approved. “‘Offline’ is just what it sounds like: It means it hasn’t been processed by the bank for an actual authorization or approval from the bank. The problem is that when the bank finds out it’s a fake charge that they never authorized or approved, they dispute it—and you lose.” Brodsly added that the bank is in the right because the charge is not a legitimate transaction since the bank never actually gave an authorization code. “It’s horrible for transportation companies because the money is in their account, so they think everything is fine—they pay their expenses, use the money for business, etc. Then weeks later, it’s taken back out again and there’s nothing they can do.”

» Determined to Get This Scammer off the Streets After seeing the damage his clients bore because of Barbero, Brodsly wanted to make sure he didn’t strike again: “A lot of transportation companies are small businesses, and something like this can have a devastating impact.” Brodsly decided to warn his clients and others in his network by using e-blasts, social media, and his blog to alert them to the situation. But he really wanted to protect his clients and other merchants by putting an end to Barbero’s fraudulent trail. Brodsly got his break when he was contacted by Adrian Davis, general manager of San Diego’s Five Star Transportation, who had, in turn, been contacted by Barbero. Davis was aware that this new client was positioning himself to run a scam on the company but couldn’t file a complaint because Barbero hadn’t yet victimized him; meanwhile, Brodsly had tried alerting the police but no one was returning his calls, and the small window of time to catch Barbero wasn’t helping matters. Davis and Brodsly decided that Five Star would process Barbero’s request and stage a pickup so Brodsly could fully identify Barbero and collect as much evidence as possible to get him off the streets. In the meantime, Brodsly contacted Soliman and another swindled Chosen Payments client to quickly file a formal complaint so the police had a valid reason to arrest Barbero. When Davis went to pick up Barbero at the Hilton Gaslamp in downtown San Diego, his card was unsurprisingly declined. Davis then called Brodsly (who pretended to be a back-office representative for Five Star) and had Brodsly go through the scam’s normal motions with Barbero. Once Brodsly was positive they were dealing with the same guy, he staged the fake process—but told Barbero that they could not accept this type of transaction and, unless he could pay in cash, the chauffeur (Davis) would be sent home. Barbero grew angry but Brodsly told him that it was company policy and there was nothing they could do unless either a different card or cash was used. Davis and Brodsly considered driving Barbero directly to the police station, but decided against the idea. “My concern was not only that Adrian might have gotten stuck with the cost of the ride, but also that Barbero may have been dangerous,” Brodsly said. “It was too much of a risk in my opinion to have Adrian just show up at a police station, hoping that Barbero was going to be calm. I did not want to see him in a risky situation with a criminal.” Brodsly instead recommended that Davis find one of downtown’s fairly visible local cops to help with the situation. As Davis went looking for a police officer, Brodsly had a Chosen Payments employee stage walking his dog around the hotel to keep an eye on Barbero until the police got there to ensure this carefully orchestrated opportunity was not wasted. Davis was able to find an officer and Soliman filed his complaint with the police. According to Davis, both the CIA and FBI wanted Barbero detained once Brodsly gave them the full rundown. Barbero is now safely behind bars. According to the San Diego County Sheriff’s Department, he is being held at the George F. Bailey Detention Facility awaiting trial. It appears he is unable to raise the $150,000 bail and, according to the San Diego Police, also has a warrant for mortgage-­related fraud. As of print time, Barbero is being charged with nine felony counts. They include two counts of burglary, one count of burglary in the second degree, two counts of identity theft, and one charge of committing a crime while on bail/ROR/parole or probation. As he has not been convicted of any crime yet pending his trial, he is innocent until proven guilty in the eyes of the law, but there is much to learn from this. » A Scam Not Limited by State Shortly after the Barbero incident, Brodsly learned that this scam wasn’t exclusive to California. Clients and others in the industry began contacting him to discuss problems they had encountered with thieves. Tony Mehdiof of North Point Transportation Group in Atlanta, Ga., said he had a similar problem in Atlanta, Georgia. In a scam with a related pattern, ­Mehdiof lost around $3,000. “I contacted Brodsly to let him know that I, too, had been scammed,” Mehdiof explained. “I thought that the advice that he sent out to us was helpful.” Mehdiof talked about how he had learned of the California scam from Brodsly’s social media outreach, and he said he’s impressed by the initiative Brodsly took to help him and others. » Protect Yourself from Future Injury Brodsly wants to make sure that his clients and others in the industry protect themselves so this kind of scam does not happen again. He has put together the following guidelines to help: • Know your clients: If something seems shady, trust your instinct and don’t do the trip. • Never accept authorization codes from anyone ­except your credit card processor or the ­card-issuing bank. • Never run an offline sale under any circumstances unless you fully understand the risks. • Check ID and match it to the given credit card. • Request a credit card authorization form and copy of ID prior to the trip. • If you’re doing business with a new client, get them to show you their driver’s license and have them sign a trip ticket and sales slip while comparing the signature to their driver’s license, as well as getting a card swipe or card imprint. This real-life story seems like something out of “Law & Order.” In reality, it’s actual people taking substantial steps to protect others and the industry from getting hurt. Thanks to some quick action, the chauffeured transportation industry—among others—can rest better at night knowing that a fraudster who was targeting their businesses has been stopped. [CD0715] 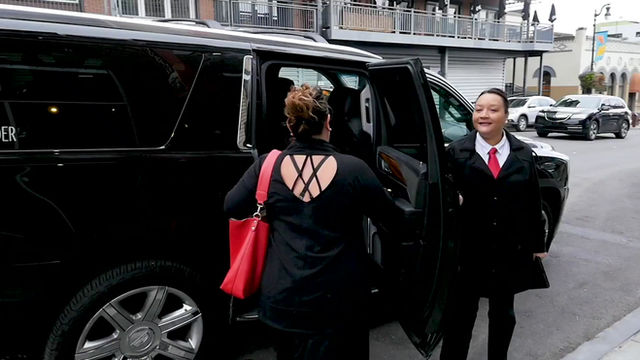